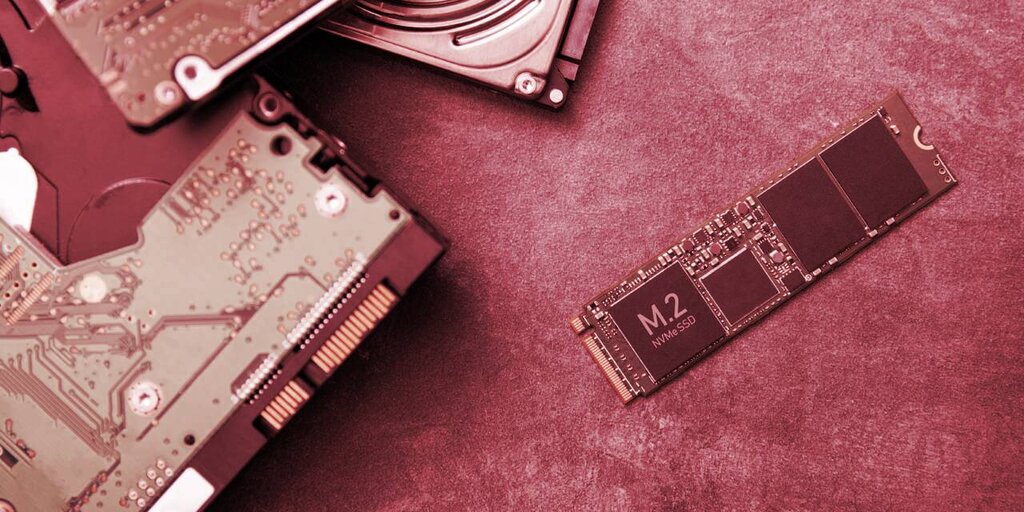 Miners planning to transact in a “proof of space” crypto intended as an eco-friendly alternative to Bitcoin have sparked a run on hard drives in Southeast Asia.

Chia (XCH), a cryptocurrency that can be mined with a high-capacity storage device, will start trading on May 3 at 10 am PST, the startup’s chief of operations Gene Hoffman told Decrypt. Trading platform Hotbit started trading XCH IOUs and futures on Tuesday.

But already Chia, created by BitTorrent founder Bram Cohen as a greener alternative to Bitcoin, is threatening to set off a hard drive shortage. Prices of storage media have tripled, according to Hong Kong technology publication HKEPC, as miners scramble to load up on hard drives in preparation for the crypto’s launch.

Hoffman said that the startup had expected this level of interest “eventually, but not this quickly.” Space committed to the network was growing at a rate of 30% to 40% per week, and “the growth has been gobsmacking in China. We went from about 10% of farmers there to 40% in about a week,” he said.

Computer storage space has become a hot commodity recently, with protocols such as Filecoin and Filebase recently launched to capitalize on unused capacity.

Chia’s mainnet was launched last month, and aims to make home-mining great again while avoiding some of Bitcoin and Ethereum’s problems. Instead of the energy-intensive proof-of-work consensus protocol, it uses storage capacity for “proof of space,” which has much lower demands on processing performance, to mine for XCH. But it’s not without its own drawbacks.

Blockchain critic David Gerard warned that the reported shortages could have a knock-on effect on gaming and other industries. “Proof-of-space crypto may do to hard disks and SSDs [solid-state drives] what proof-of-work altcoins did to video cards,” he wrote on Twitter.

Proof-of-space crypto may do to hard disks and SSDs what proof-of-work altcoins did to video cards https://t.co/16CycJF1iQ

Some users were less than enthusiastic. On Twitter, one user who claimed to have tested Chia critiqued its energy efficiency and pointed out that rewards would take five months to materialize.

However, Hoffman said that reports of a hard drive “crisis” were overstated, with shortages likely to be temporary and specific to Southeast Asia. He added that China, despite its extensive consumer electronics manufacturing industry, only makes about 20% of the world’s hard drives.

Why Filecoin Price Is Surging: Look to China

“The mix of Filecoin, before us, and our meteoric take off in China may be pinching their short-term supply chain,” he said.

In response to the demand, Chinese storage manufacturer, Jiahe Jinwei announced that it will begin making dedicated cryptocurrency mining SSDs, primarily targeted at Chia Coin miners, which could be sold directly to them. It also reported that its entire supply of high-capacity storage devices has already been sold out.

Whether or not the hard drive shortage is as extensive as painted, the publicity can’t be bad for Chia.

The project has been more than three years in development; Chia raised some $3 million in a 2018 seed funding round. Since then, two further rounds have raised a further $28 million.

“I backed Chia because I’ve known Bram for a long time and he is one of the greatest living protocol designers (BitTorrent), right up there with Satoshi and Vitalik,” said AngelList co-founder Naval Ravikant.

Nevertheless, the project is taking an unusual route. XCH has no cap, favoring predictable, continuous inflation as an alternative, and the company has a cache of 21 million XCH pre-mined, revealed in its recent business whitepaper—which could have raised some eyebrows were Chia a proof-of-stake blockchain.

And while “proof of space” aims to increase decentralization, it’s an objective Chia won’t be following for itself. Instead, it’s going public. This has nothing to do with the very high-profile and recent Coinbase listing; it was always on the cards, said Hoffman.

A listing will allow backers to treat Chia’s equity a bit like a Chia coin ETF, using its 21 million XCH pre-mine as its main asset.

“Our plans have not changed there. We hope to file and list our equity in the next six to 12 months,” said Hoffman. “We had to get launched first,” he added with a smile.

Deutsche Boerse to Delist Coinbase Shares Due to Admin Error

Nearly Two-Thirds of US Adults are ‘Crypto Curious’: Survey