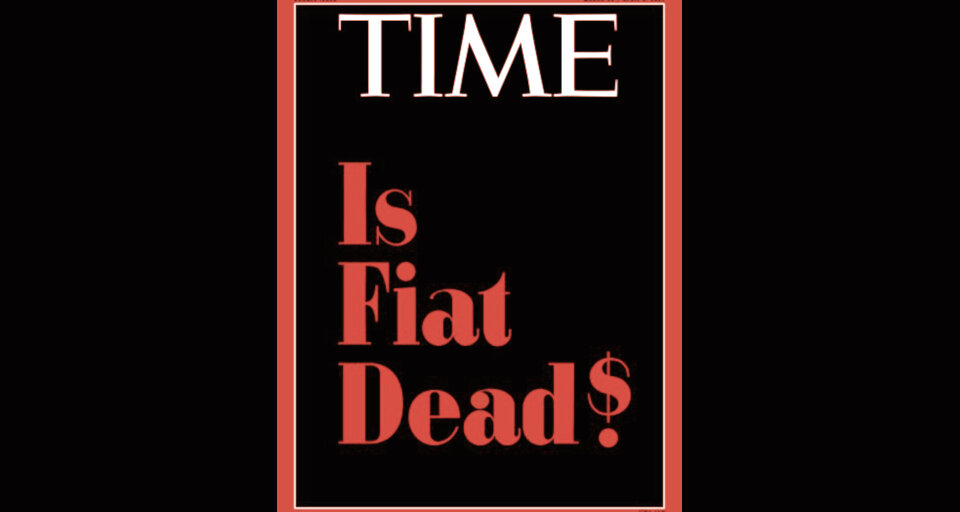 Not to be outdone by Charmin and Taco Bell, TIME has formally entered the NFT market.

Images of three covers are being auctioned off as digital collectibles over the next two days, the magazine announced this morning.

The first is TIME’s cover for the week of April 8, 1966, which reads, Is God Dead? The second is a reference to the first—the cover from 2017, which reads, Is Truth Dead? The third is an alternate cover for the current issue, which is only being released in NFT form; it asks, Is Fiat Dead? The actual cover for TIME’s March 25 / April 5 issue addresses anti-Asian violence, and the recent shootings at spas and massage parlors in Atlanta.

Keith Grossman, the president of TIME, wrote on Twitter that the magazine would begin accepting crypto as payment for subscriptions within the next 30 days. The company is also looking to hire a new chief financial officer who’s “comfort[able] with Bitcoin and cryptocurrencies,” according to a LinkedIn post.

Collectibles will always be important but @TIME‘s crypto ambitions are larger as we continue our digital transformation!

Within 30-days, TIME will accept cryptocurrencies for digital subscriptions with more to come via @JuliaLaRoche. https://t.co/Chk539f5uG

Hype around NFTs, or non-fungible tokens, has reached a fever pitch across industries—these are blockchain-based collectibles (typically images or video files) that offer transparent proof of ownership. Musicians have been selling NFTs, as have visual artists, frequent tweeters, and other influencers. Earlier this month, the digital artist Beeple sold an NFT at Christie’s for $69 million.

TIME isn’t the first media outlet to experiment with NFTs: the Associated Press sold a piece of NFT art, and Quartz sold an article as an NFT. Bleacher Report auctioned off digital basketballs for NBA All Star Weekend, and Decrypt (that’s us!) will introduce an NFT rewards system for readers in the near future.

TIME’s Is Fiat Dead? NFT dovetails with a broader aesthetic trend in the world of crypto art. Many of the top-selling NFTs (like Beeple’s) make explicit reference to crypto, and predict the death of traditional finance at the hands of the blockchain. It’s a formula that works, at least for now; the high bid on the Is Fiat Dead? NFT is already 20 ETH, or over $35,000.

The bidding for TIME’s three NFTs is happening on an NFT marketplace called SuperRare, and is set to end on March 24.