Get Rich Like Beeple With This Crypto Art NFT Generator 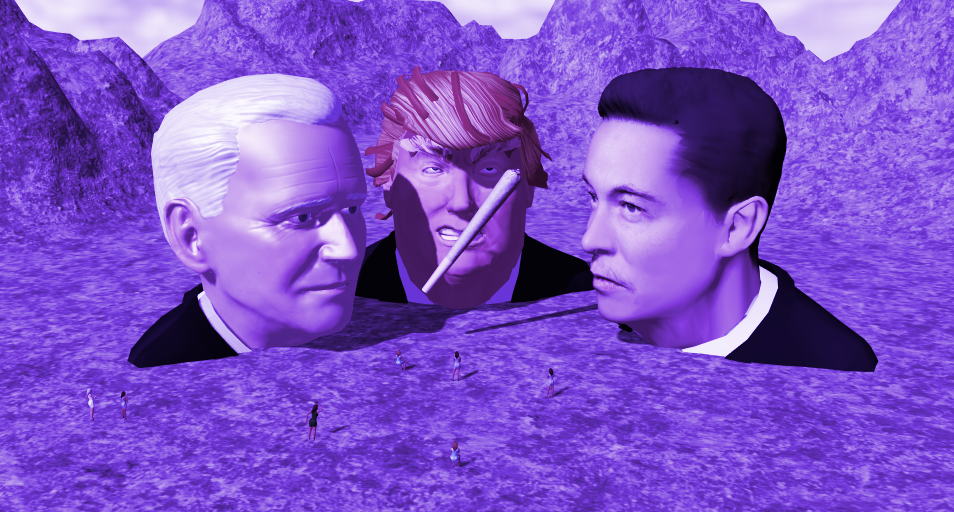 The crypto art non-fungible token (NFT) phenomenon has seen some wild heights so far, but no single person has benefitted more in 2021 than American artist Mike “Beeple” Winkelmann. Earlier this month, a piece of his NFT artwork called “EVERYDAYS: THE FIRST 5000 DAYS” sold for $69.3 million via Christie’s auction, the highest amount ever paid for digital artwork.

Now you can try to replicate both his style and success through the Beeple Generator, an open-source web app that randomly generates 3D models inspired by Beeple’s artwork and allows you to reframe the shot before rendering a final version to save.

Have a glance and see what kind of absurdist creation you come up with. A nude Buzz Lightyear lounging on the stem of a giant banana taped to the surface of a purple planet? Donald Trump and Joe Biden leashed and being walked by a giant, bipedal dog? A Dogecoin image on a towering, Game Boy-esque monolith held up by ropes and scaffolding? It’s all possible and more.

Beeple Generator is not an official product, but rather something of a tribute/parody by artists Sam Newell and Vince McKelvie. Speaking to Input, McKelvie offered praise for Beeple but scorn for the crypto art boom.

“I'm happy for him. He is an open-sourced artist, gave a lot of his work away for free with no expectation of monetary gain. I do the same thing, and I think it's cool that he was rewarded for that,” said McKelvie, who added, “Everything involving crypto is a scam lmaoo. It's all a pyramid scheme, including the art platforms… especially the art platforms.”

i did not create it, you can bid on it here:https://t.co/FfdRSwpCv1

Despite his words, McKelvie has actually already sold an NFT version of the website itself via Zora, where it sold for 69 FWB (about $635 as of this writing). The buyer, artist Chris Martz, has put up a secondary asking price of 34,000 WETH (about $68.4 million) for the site, but promised to donate any proceeds evenly between The Mint Fund and Ktown for All.

Crypto art NFTs have surged since the start of the year, with the top three NFT marketplaces reporting $342 million in trading volume in February alone—more than in all of 2020. The boom has brought in NFT offerings from creators as diverse as Taco Bell, musician Grimes, NFL player Rob Gronkowski, and TIME Magazine, plus crypto collectibles platform NBA Top Shot has driven $436 million of trading volume on its own to date (via DappRadar).

Beeple, for his part, is not a cryptocurrency enthusiast. The longtime digital artist quickly converted his Christie’s auction winnings of $53 million (that’s $69.3 million minus fees and other costs) in Ethereum to US dollars, and said he believes that this current NFT boom is a bubble that will quickly pop. “EVERYDAYS” buyer MetaKovan, who subsequently revealed himself as investor Vignesh Sundaresan, owns an NFT collection called the MetaPurse Fund that is now estimated to be worth $189 million.

Beeple has tweeted his view on the random generator that attempts to cop his style, and it’s a kind one: “ABSOLUTELY FUCKING GENIUS.”