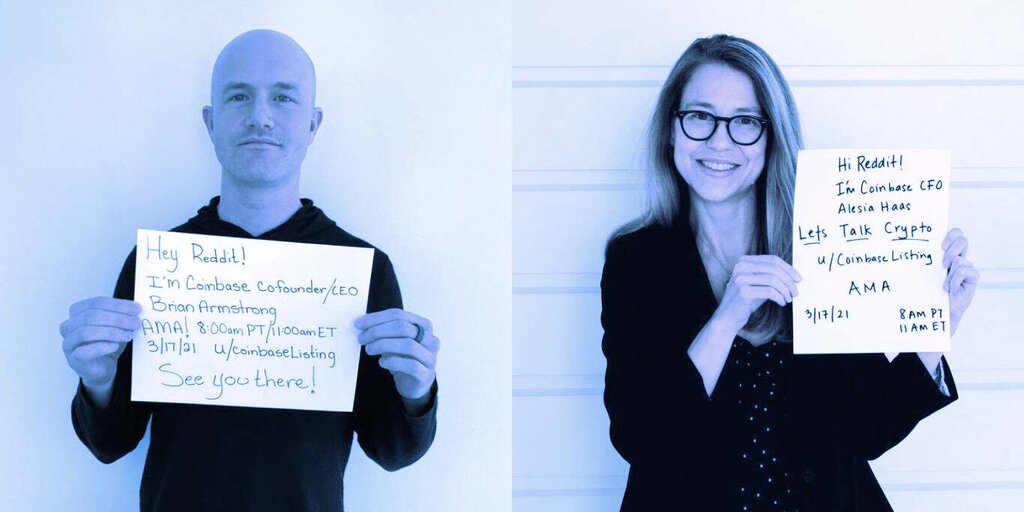 Coinbase CEO Brian Armstrong took to the social media forum Reddit on Tuesday to address a series of user questions ahead of the company's impending direct listing, which will make it the first U.S. cryptocurrency company to trade publicly.

Armstrong fielded questions on Coinbase's customer service shortcomings, the potential threat that “decentralized exchanges” pose to Coinbase, and the company's decision to sell traditional stock shares rather than tokens.

The Reddit AMA (Ask Me Anything), which also included a video from Armstrong and Coinbase CFO Alessia Haas, was the first of its kind for any company going public. Typically, pre-IPO companies engage in a process called a road show in which executives engage in a whirlwind series of meetings with well-heeled investors to make the case for buying the firm's shares.

Armstrong, who has long eschewed traditional media in favor of Internet forums like Hacker News, explained the decision to go on Reddit—another forum he frequents—by saying Coinbase wanted to take “time to engage every type of investor out there” ahead of going public.

In the video, he also noted that Reddit users had submitted nearly 1,300 questions, and that Coinbase had chosen to answer the ones that attracted the most votes, aside from those the company couldn't address for regulatory reasons.

The questions included one from a long-time customer who said they had become disillusioned with the company's customer support, and claiming Coinbase was “hiding” between layers of automated responses. In response, Armstrong blamed the recent crypto bull run, which he claims has led customer service requests to quadruple in recent months. He added, though, that Coinbase has been hiring furiously to address the issue, and predicted the situation would improve.

“Actually the number [of people] we brought on this year is more than the entire size of the customer support team prior to 2021,” Armstrong said. “And you can imagine it takes a long time to both hire those people and also train them so that they can be really effective in helping customers. So you are seeing some automation and things like that, but we never want to prevent customers from contacting somebody.”

Armstrong's most intriguing response to the flurry of questions may have been regarding the threat that decentralized exchanges or DEXes—which are nearly autonomous crypto trading platforms like Uniswap—pose to Coinbase, which is centralized and charges much higher fees. He predicted that Coinbase would evolve to integrate with various DEXes, providing customers with the option to access them as they wish in the same way Amazon decided to host third-party sellers on its site.

“It's like Amazon in the early days,” Armstrong said. “Jeff Bezos thought, ‘Hey, why don't we allow third-party sellers to put their products on there as well?' People thought he was crazy. Why would we put a competitor's product right next to our own? And he realized that, well, we want to create value for our customers, and in the long run, that's what's going to make us a valuable company. So we always try to think about what does the customer want, and give them that, not what does Coinbase want.”

As for Coinbase's decision to offer traditional shares rather than crypto tokens for its public listing—a move that disappointed some crypto diehards—Armstrong blamed a lack of infrastructure as well as regulatory barriers. But he predicted that Coinbase might issue tokens in the future, and that it could help other companies to do the same.

“I think there's companies in the future that will go public that way,” he said.

Other questions included more cryptic ones, such as whether the Coinbase executives preferred “doge or cat”—likely meant as an allusion to whether the company will list the meme-based cryptocurrency Dogecoin. Both Armstrong and Haas responded “doge,” though it's unclear if they were referring to the coin or the animal.