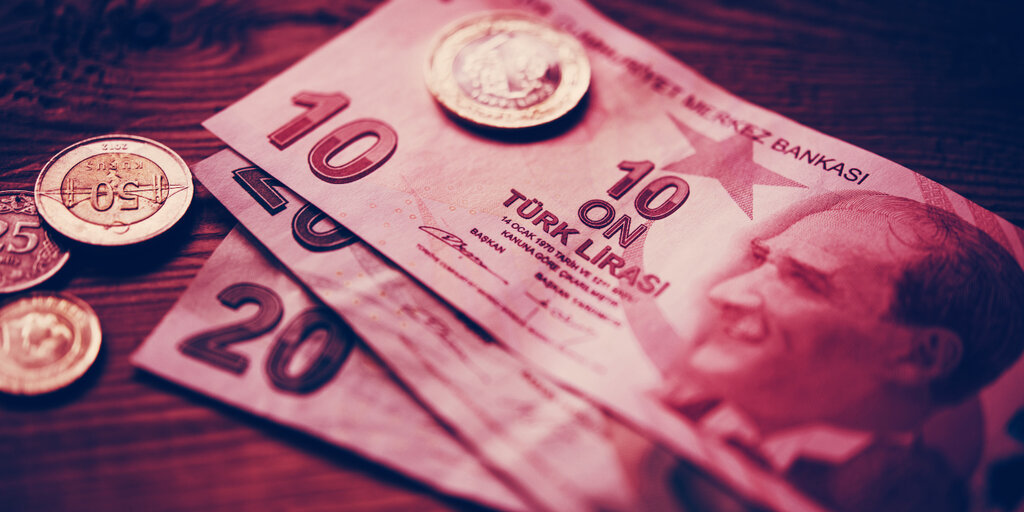 Turkey’s currency is historically plagued by high inflation, having also recorded a 23% drop against the dollar last year, and was in free-fall until the previous governor, appointed in November, raised interest rates to rein in inflation despite Erdoğan’s stance against high interest rates—the reason why he was ousted, according to analysts who spoke to Decrypt.

According to Google Trends data, which tracks Google searches, the number of searches for “Bitcoin” in the country last night reached “peaked popularity” (a relative score of “100”) within the last seven days, coinciding with the Turkish social-media shockwaves as Asian markets opened amid fresh lira turmoil.

But a further analysis into the Google Trends data shows that the interest in Bitcoin spiked particularly in some of the country’s most impoverished provinces, among the top three are Diyarbakır, Batman, and Hakkari.

A nation of 82 million sees its currency crash 15% in a single day.

No coincidence that Turkey has some of the highest per-capita Bitcoin usage in the world.

A growing number of Turks are peacefully choosing a different monetary system that their oppressors can’t control. https://t.co/BD0bl7URic

A Turkish cryptocurrency industry representative, who wished to remain anonymous as a recent update to the Turkish Lira Protection Law penalizes what may be interpreted as defaming the country’s currency, said that their company recorded today a particularly high trading volume, speculating that fears over capital controls may eventually push regular citizens toward seeking alternatives that don’t involve regular bank accounts.

“For many, especially the young, crypto investment is increasingly seen as the digital version of the country’s tradition of hoarding physical gold at homes,” the crypto executive said.

The decision follows attempts by the previous governor, appointed only last November, to rein in inflation through rate hikes.

“Central Bank’s decision to increase the interest rates by two percentage points last week was an unexpected event despite being the right response,” Özge Öner, assistant professor of economics at the University of Cambridge, told Decrypt.

That was unexpected because Erdoğan, who has much influence on the central bank, is a staunch promoter and practitioner of an unusual economic theory that high interest rates fuel inflation, a theory that is also espoused by the new governor, as per op-ed he has penned over the year for the Islamist daily Yeni Şafak. The paper also accused last week the previous central bank governor of being part of a conspiracy against the economy due to his pro-high interest rates policy.

“For crypto enthusiasts who love to bash fiat, defined as money by decree, the whole lira drama provides a convenient anecdote,” Alper Akalın, a financial analyst and the co-founder of DEVA, an opposition party co-led by Erdoğan’s former economic minister, told Decrypt.

But it’s only the beginning of another downward spiral, he explained, adding that there is an unequivocal expectation among analysts that the new governor will reverse rate hikes initiated by the previous governor.

To calm market fears, Treasury and Finance Minister Lutfi Elvan tweeted a statement this morning saying that the country will stick to free markets and a liberal foreign-exchange regime.

But the damage is already done, according to Öner. “It’s more appropriate to define the situation as hyper erosion of trust caused by political turmoil,” she said, “rather than just a currency crisis as a lot of people seem to assume.”

Government failures like these give credibility to crypto in the eyes of ordinary people living under high-inflation regimes like Turkey, Akalın said.

“Turkish government’s handling of the country’s currency has been an unintended promotion for crypto.”